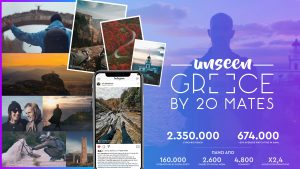 Huawei unveils the invisible side of Greece with the power of the new Mate 20 Pro.

Through the action of Unseen Greece by 20 Mates and under the auspices of the Hellenic Tourism Organization, the new Huawei Mate 20 Pro will literally travel all over the country to the 20 most important Greek instagrammers and will reveal them via the Leica triple camera with the new ultra -big flashlight and the power of double artificial intelligence, the beautiful side of Greece with a different look.

Huawei Mate 20 Pro travel to Greece go through the most emblematic tourist destinations in the country such as Santorini, Zagorochoria, Mani, Meteora, Hydra, Chania, Olympus and Chalkidiki, as well as urban landscapes Athens, Thessaloniki, Patras and other cities.

The photos made by the 20 instagrammers who respond to the Huawei public call via Instagram will collect and will be the material of the platform www.unseengreece.com, giving everyone the opportunity to rediscover the beauty of Greece. And while the original plan envisioned delivering 200 images, eventually, due to the zeal of the photographers and the high level of material, 500 images were delivered. The photos will be used as material for EOT’s social media campaigns, and will debut at the large ITB-Berlin tourism fair.

This website uses cookies to improve your experience while you navigate through the website. Out of these, the cookies that are categorized as necessary are stored on your browser as they are essential for the working of basic functionalities of the website. We also use third-party cookies that help us analyze and understand how you use this website. These cookies will be stored in your browser only with your consent. You also have the option to opt-out of these cookies. But opting out of some of these cookies may affect your browsing experience.
Necessary Always Enabled
Necessary cookies are absolutely essential for the website to function properly. This category only includes cookies that ensures basic functionalities and security features of the website. These cookies do not store any personal information.
SAVE & ACCEPT